I knit for a lot of reasons – and I’m certain we’ll cover a ton of those topics in time. As I shared in my opening post, one of the main reasons I started to knit was because of my long distance relationship. And that relationship … still going! Recently my husband drove from his home to mine (a 13 hour drive one way!) to spend 10 days with me, and to celebrate our third wedding anniversary. Yay!

This is us, for the record (taken on our wedding anniversary this year):

Anywho … one thing I really wanted to get done while he was here was sorting through my yarn collection. It’s either been in buckets hiding in my closet, or in one of my coveted boxes and basically all I know of/use. I could have done it myself, but it’s much easier with a second set of hands to help move things or grab things as needed. 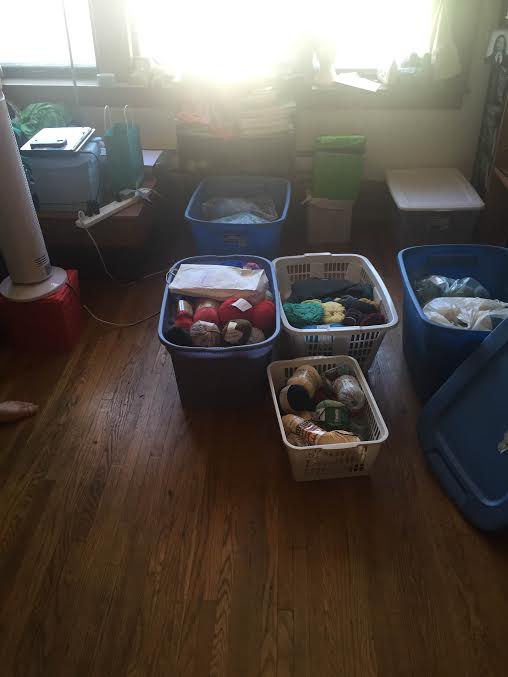 The three blue tubs live stacked on top of each other in the living room closet; the two white baskets were both in the closet; and those 4 small kid toy chests/animal boxes (the blue, the red, the white, and the green?) – well these held my luxury fiber, specifically handspun and club yarns from Nerd Girl Yarns, and club yarns from Supernatural Yarns. They are my two favourite independent dyers and I consider them luxury (both in feel and how much I pay for the custom colours and clubs).

So we pulled all the yarn out and sorted it. One white tub was made just for cotton (in case I have a dishcloth itch to scratch, or a housewarming gift to make). One tub got filled with acrylic yarn I’ve been given over the years (that truthfully, I will probably never knit with again). Going through I found some gems – yarn I forgot I had that was soft and yummy, and went into that clear tub in the corner so I can easily get to it. The animal boxes got resorted a bit, but still hold my luxury stuff.

All in all, it was good to re-acquaint myself with the yarn I have. It won’t stop me from buying more, of course … or with knitting with new stuff before the older stuff. But now I can see it all a bit easier in that corner of the room, and knowing it calls to me.
The yarn calls to me.

View all posts by Jenn